The aim of «Relending Facility» crediting - facilitating industrial goods purchasing for foreign businessmen, especially machinery and similar equipment in Taiwan. Essentially, it is the inter-bank agreement, according to which our bank, extending a credit line to foreign financial institutions, helps to finance their customers when importing Taiwanese equipment. When possible transactions floating interest rates are used. Financial institutions interested in the establishment of «Relending Facility» agreement, must submit an application together with the annual report for the last three years. Highlights of the program are outlined below. Bank Guarantee is not available. The loan is insured in Taiwan. Export-Import Bank should coordinates the servicing bank to repay the debt.

Equipment, parts, raw materials and other products of Taiwanese origin.
Loan currency:
US Dollars
Percentage and amount of funding:
For each transaction, the amount of funding does not exceed 85% of the purchase price and gross 2,000,000 USD.
Loan terms:

Interest rate:
Based on six 6) month LIBOR (London Inter-Bank Offered Rate) for the US dollar plus margin.


Loan amortisation.
Typically, the loan is repaid in equal semi-annual installments, the first payment is paid after 12 months from the date of payment of Export-Import Bank. In the case of a loan for a period of less than one year, occupying a fully repays the financial institution (once) a loan in the stipulated term.

After signing the contract buyer must make a down payment of 15% of contract value by bank transfer. 85% are payable in equal installments for five year period, with an annual percentage (6%) for the services of Export-Import Bank of Taiwan according to the installment plan, 10 payments in total.

Why do our partners choose crediting?

*actually the first payment - after 6 months upon receipt of the bill of lading (or delivery of equipment) start after the installation and commissioning, start-up of production and sales of finished products. The interest rate can be pre-agreed with the bank (crediting for 3 years at the rate of 4% or 5% per annum is possible). 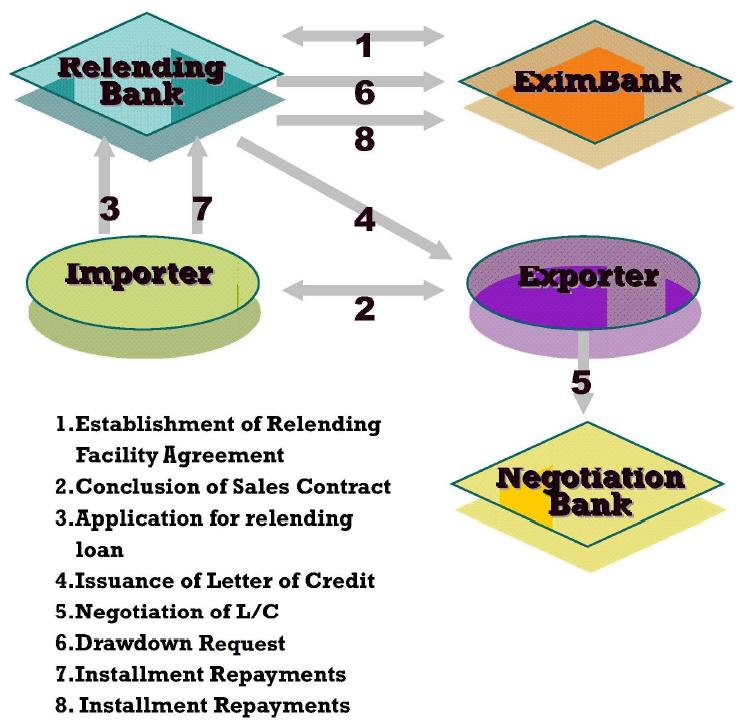 What should a bank do to cooperate with Export-Import Bank upon the scheme «Relending Facility»?